The Valiant was apparently commissioned in 1945 by the Ministery of Munitions. The tug was 22.5 metres long, 5.4 metres wide and displaced 72 tons. A sistership, the Fury, was built at the same time. The Valiant was powered by a Crosley HR4 diesel engine giving a top speed of only 8 knots.

After the end of World War II, ownership of the Valiant passed to the Melbourne Harbour Trust Commissioners. It appears that the ship was modified at this time, with water tanks added, the foredeck lowered and equipment added to suit her new role as a fireboat. It appears to have operated out of Melbourne. I do not know much more about its history but in 1975 it was still registered to the Commissioners.

The Valiant is located 1.4 kilometres to the east of the northern-most point of Barrenjoey Headland and 1.0 kilometres to the east-north-east of the eastern-most point. It can be found at GPS Reading 33° 34′ 48″S 151° 20′ 40″E. Note that all the GPS Readings on my Web Site are taken using AUS66 as the map datum. If you use another datum you may be about 220 metres off the wreck. See my GPS Page for more details and how to convert readings. There used to be a mooring owned by Atlantis Divers on the wreck (they have gone broke and shut down – a pity as under the original owner Mike it was a great operation) and you can use it if it is still there.

The wreck sits at a depth of 27 metres and sits basically upright with an increasing list to port. The wreck faces west, back into Broken Bay, making it more likely that when it sank it was heading back in towards safety. The ship is basically intact but over the 20 years since 1989 it has changed a fair bit. 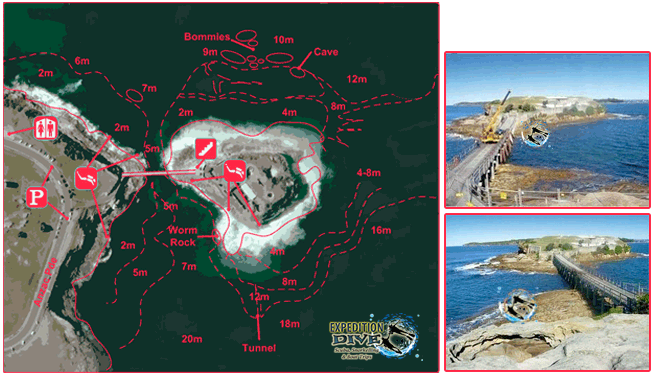 Be the first to review “Valiant Wreck” Cancel reply